Emily George, at 91 years old, contracted COVID-19 in September 2020, after mostly being locked down in an assisted living home in Florida since March 2020. But that’s not so strange, given the circumstances. What is strange, and somewhat miraculous, is she didn’t come down with a single symptom.

Emily George, mother of six children, compared childbirth to sneezing. Her six children seldom recall her being sick, ever. And in times she injured herself, she claimed to feel no pain. It was a mystery as to whether she actually felt no pain whatsoever or if she just pretended.

Of Emily George’s six children, she would get eleven grandchildren. This is where I come in.

When Corona first exploded on U.S. soil, we were most concerned about my grandma, since she is 91. Her assisted living locked down and did all the proper precautions. Emily didn’t really understand why and was quite annoyed about the whole situation, especially being unable to see her kids. At first she was breaking rules about leaving her room and getting upset with the staff. Her kids, including my Mom, had to be blunt about it, “they are trying to save your life, this virus could kill you.” She’s 91, so she’s slow to get things sometimes, though my grandma was always on the simple side.

There’s routine testing for corona, which is the only reason how we found out she contracted the virus. She called my Mom asking if she needed to go to the hospital. But Emily didn’t have a fever, or even a sniffle, so my Mom had to explain there’s no treating the virus, only the symptoms and she is asymptomatic. Still, she didn’t quite understand why she was being quarantined in her room, and desperately wanted out. “Do you realize,” my Mom tried to explain, often a frustrating task with Emily, “that you are a danger to everyone else right now. You are contagious even though you are fine?” I don’t think she ever really fully understood/understands.

It made me wonder… do I have this freakish immunity to corona? Someone run some tests on Emily’s blood and DNA. She’s impervious to pain and disease, apparently.

Probably I do not. Growing up, I was sick quite a bit. My allergies led to repeat sinus infections and strep throat (which would later be the reason I got a tonsillectomy, which nearly killed me because I hemorrhaged blood twice in the recovery). My stomach is sensitive and gets upset easily, so I have to be careful what I eat all the time if I don’t want to have bathroom emergencies. Additionally,  I was riddled with ear infections as a kid which still haunt me. Oh yeah, and I’m allergic to penicillin, it makes me break out in hives.

Overall, I’m healthy. I’m relatively fit and these allergy attacks and stomach issues are usually short lived and aren’t serious issues. With the exception of stomach viruses, I seem to fair pretty well against other viruses. Often times my allergy issues only persist if I’m really stressed out and not sleeping well. My metabolism is far above average, which I’m thankful for. Yes, I am thankful for my health, but I’m fucking sick of people saying “at least you can be grateful for your health” in the amount of loss and stress this year has caused.

My grandmother did have a semi-psychotic episode a couple years back where we feared might be the worst. She was blabbering incoherently. We thought maybe she had a stroke or something. It was quite scary. I wasn’t there, but my parents live in Florida not far from my Grandma’s home.

Thankfully, she came back to lucidity, not all at once, but in waves until she was back to her normal self (if you could even say her normal is “normal”). During this episode, when my mom was in the hospital with her, the nurse pointed at my Mom and said, “do you know who that is?” She said, “yes, that’s Lori.”

This is strange for a number of reasons (not that my Mom and I don’t look alike), but mainly because when a person’s mind starts to deteriorate and dementia sets in, they remember their far past way more then their more recent years. In fact, it makes no sense why she would remember me over my Mom. Especially since my whole life she has lived in Florida and I have lived in New York, so while we love each other, it’s not like we have spent a tremendous amount of time together over the years.

Emily’s husband, my grandfather, died when I was in middle school. He’s somewhat of a controversial figure in the sense that while his six kids defend his intelligence, humor and creativity, they all have nightmare-ish stories of beatings that are beyond “the times” and would land a person in jail today. He was misogynistic and racist. It was embarrassing going out to a restaurant with him as he always made inappropriate comments to waitresses in front of his wife, daughter, and three grandkids. I learned what the work “fuck” meant in elementary school because he taught me. I feared him till the day he died, and it’s almost perplexing to me that all six of his kids turned out to be good (albeit a bit crazy) people, and that none of them are serial killers (haha). When he died, my grandma even bragged, “I didn’t shed a tear.” In many ways, she was a prisoner in that marriage. She was only in love with her kids. At minimum, it was a verbally and emotionally abusive marriage.

When my grandfather died, we assume he cried out as his heart was giving way, and Emily rushed to the bathroom to get his meds (they lived in a trailer home) where the washing machine had a leak. She tripped on a pool of water, smacked her head unconscious and would remain naked on the floor for a couple days, in and out of consciousness, unable to get up, until a neighbor broke in and saved her life. It’s amazing I didn’t lose two grandparents that day.

The man who saved her was a black man named Hugh. A super nice guy who worked at Disney World as a mechanic. He had two little kids what were cute and sweet. I visited him years later when I was in high school to thank him for saving my grandmother’s life. The kids wanted me to help them with a puzzle and told me that they missed my grandma. My family is eternally grateful for Hugh, and honestly, I can’t image what racial slurs my grandfather said about him and likely to his face. I apologized if my grandfather was ever rude and unkind (which he was known to be, it was kind of his thing). But Hugh shrugged and said he loved Emily, and genuinely really enjoyed any interaction he had with our family. Emily, to this day, mispronounces his name and calls him “Huge” instead of Hugh. It’s running joke in our family. But I guess in some ways apropos because he is huge to us— he saved Emily’s life.

Emily George, my grandma, will tell you the same stories over and over and laugh at them every time. She loves Bingo. Her kids. And her grandkids. She’s slowly losing it, but I’m convinced she’ll be the oldest woman in the world and out live us all. Emily George, at 91, the youngest of 19 kids (legitimately), is somewhat amazing. 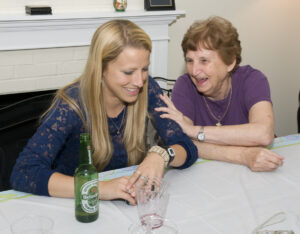