I liked Palm Sunday. Because my family went to church every Sunday until I was 16. A lot of good it did me (it turned me into a heathen). But Palm Sunday I liked, not really for religious reasons, rather because when you walked into church they gave you palms which people made into crosses. So it was perfectly acceptable to sit through church and make origami out of a leaf. Otherwise, if you were obviously not paying attention, you’d get in trouble. It was rare I was paying attention, but my quiet disposition and my overactive imagination served me well as I went off into my day dreams during sermons.

Palm Sunday meant something else. Easter was. Or what was more important to me— Spring Break. A week off of school!

My family loved peeps. We loved them regular, we loved them frozen, my mom even hid a box with the plastic film ripped because we liked them stale. Mom, being a creative, didn’t buy those store made baskets. She tailored each basket specifically for each kid with a toy (Lisa and I usually got some sort of stuffed animal where Mitch usually got something that promoted violence), our favorite candies (including peeps and Cadbury Eggs), and sometimes a children’s book about Jesus or a Springtime coloring book.

Lisa was the best at finding eggs Easter morning. Being the oldest, she had the advantage of experience and height. When Mitch was small, my Mom and I would give him hints so he could keep up until he got older and became a fiercely competitive little prick.

Something I did with my siblings and friends was ‘peep wars.’ I’m unsure who invented peep wars or if this is even something else other people did. Essentially, what peep wars is, is you place two peeps facing each other (on a plate) and stick a tooth pick in each so they look like they are going to joust. Then you put the peeps in the microwave so they’ll expand and stab each other. I’m unsure now how we determined who won the peeps war (though, really, both peeps lost). My parents yelled at us for having peep wars because they thought we would both damage the microwave and wasted all the precious peeps. At my best friend Lauren’s, she had a second microwave in the basement of her house so we held lots of peep wars and laughed maniacally like a person who places a lot of money on cock fights. 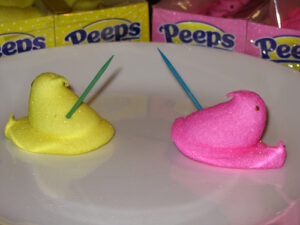 Now, I believe, some form of peeps are available for every holiday. But back then, peeps were an exclusive Easter thing. And we cherished it. We had all the peeps we could. Before Easter, during Easter, and then in post Easter candy sales. What genius decided to put colored sugar on a marshmallow?

The casualties of the peep wars didn’t die in vain. We’d scoop the molten mallow and add chocolate bits to it— so the chocolate melted into it and then you could use it as a dip for graham crackers for a s’mores treat.

I don’t think my dad ever really cared for the Easter bunny. Raised by the most religious person I’ve ever met, my father felt it was too much a distraction from Jesus and that Easter was actually more important than Christmas because it celebrates God’s victory over sin and death. “They are just kids,” mom, the nurturing one and creative would argue. Then again, when you’re small the idea of a person dying for your sins is pretty high concept, especially since we were still free of almost all sin besides making peeps kill each other.