Do you believe in fate? Probably for most of my twenties, I would have given you a hard no. I heard a quote once that said “fate is just your decisions plus time.” Which I still mostly believe. But the older I get, the more I see things, often small, that make no sense to me. That feel a little too strange to be coincidence. This is such a tale.

It starts with my birthday weekend. The weekend just before my birthday, it was my nephew’s communion. My boyfriend and I went out to Long Island for it. The communion itself was funny, because during the ceremony, Charlotte, my four year old niece who usually never stops talking was extremely well behaved. We made faces at each other during the ceremony, playing the mirror game, but she didn’t say a peep. Midway through the ceremony, a baby starts wailing in the back of the church. Screaming. My mom turns to Charlotte and whispers, “who’s being a cry baby?” And without missing a beat, she goes, “oh, that’s baby Jesus.”

I store my AC unit at my sister’s house because I have no room in my small Queens apartment. I had meant to take it with me that weekend, especially since I had my boyfriend with me who is very strong. I’m used to transporting my AC unit and installing it on my own for years, being stubbornly independent, but as I age and have neck injuries, I’ll gladly let my boyfriend with bigger muscles do it.

Anyway, I forgot to take it out of my sisters shed. Damn it, I cursed myself when I got home. What an idiot! Since I was working remote that week, I decided I’d go back out to my sisters the following Tuesday into Wednesday night, because my brother in law was traveling for work as he often does, which is hard on my sister. Plus, on my block, ConEd has been ripping up the street for construction, and I was waking up to drilling every morning. Additionally, I seldom pass up an opportunity to be with my siblings kids and cuddle them because they are the cutest.

So goes I go back out to Long Island.That night, I slept upstairs in my nephew’s bedroom and the kids slept downstairs with my sister. Late at night as I was drifting off to sleep, one of my nephew’s electronic toys starts going off and making noises and glowing. As a horror movie fan, I’m like, “oh great, it’s just me and a ghost up here.” But I was so tired I simply fell asleep.

In the morning, I work from my sister’s house until around noon when her wifi cuts out on me. I try to reboot it but it doesn’t work. I text my sister her wifi is out, but I got what I needed done in the morning anyway, so I was headed back home. On my way back, I stopped at Capital One bank on Sunrise highway which is next to the South Shore Mall in Bayshore. A mall I once frequented when I was young.

I couldn’t tell you why, but something was pushing me to go to the mall. I didn’t necessarily need anything, but my wardrobe could always use updating (ask anyone who knows me I suck at fashion) so I just decided, “eh, I have some extra time, maybe I’ll go walk around the mall for a little.”

In the mall, I pass an arcade/pinball machine store, and I think, “whoa this is cool and new.” There’s a line of pinball machines you can play, all sorts of cool themes from Jurassic Park to Guardians the Galaxy to The Beatles. And I’m checking them out being a real dork when I hear from behind me someone say, “Lori?”

I turn around and it’s my godfather, my Uncle Dennis and my Uncle Mike.

Here’s where this is weird… My godfather, I’ve only seen once in 2+ years. This is because he was diagnosed with Parkinson’s disease a couple years ago. His health has been on the decline for sometime, but it took a long time for doctors to figure out what was wrong with him. Without going into details about his symptoms, part of the trouble with diagnosing my Uncle is because he’s a legit genius. He has a genius level IQ and was extremely successful in his life. Additionally, he was also very athletic. So, because he is so high functioning, he was not typical Parkinson’s case. Then, once COVID happened, my aunt became paranoid (rightfully so) and they basically became hermits.

This was devastating to me and the family. I’m not saying they didn’t do the right thing. They were being cautious to keep him alive and try to improve his condition. But I’ve always been extremely close with my godfather. He lived a town over. He was extremely generous and affectionate to me my whole life, being a prominent father figure in my life, at times, I was closer to him than my own father. Him and my aunt frequently took me to Broadway shows, something they loved doing, as did I. My parents didn’t really have it in their budget to treat me to such things. I have fond memory after fond memory of them taking me on the LIRR to restaurants and shows. I wonder to this day how much they were an influence on me of my love of live entertainment, and how their support and advice guided me to the path I am on today.

Now, my Uncle Mike lives in North Carolina and I had no idea he was even in New York. He was there to help take care of my Uncle Dennis, who needs help these days. My godfather, despite not being as sharp as he once was, loves playing pinball. It makes him happy and is stimulating. When they discovered that place in the mall, they started taking him there.

Furthermore, my mom’s youngest brother, my Uncle Brian, was on his way there.

Let’s return to how much of a cosmic coincidence this is. First, I forgot my AC unit and had to go back out to LI. Second, if Lisa’s wifi didn’t cut out, I would have stayed there longer and worked from her house for couple more hours. Third, the strange desire to visit the mall I had nostalgic ties to at that exact time. Fourth, seeing the pinball store at that exact moment my uncles, whom I had no idea would be there, whom I haven’t seen in years, whom I miss so much, every day.

All of us laughed and embraced and we all played pinball together. My godfather was so happy. He said it was the best day he had in a long time. I called my mom and her other two siblings (she’s one of six) to tell them the amazing news. My mom said it’s angels. My other uncle said, “ and you don’t believe in God?” He said he thinks however the universe planned this was not for me, but for my godfather. That he has been going through such a hard time and has been in both physical and emotional pain, that he needed this. But truthfully, I needed it too. It was so much fun.

Unfortunately, I couldn’t stay long because I had to get home and finish work. I do have the luxury of often making my own hours, but I still am very busy.

So that’s my story. Every word of it is as true as it is amazing. If I do believe in God, or a cosmic entity I would prefer to call it, it would most likely mirror what happens in the episode of Futurama, “Godfellas” (episode 20, season 3) which is one of the best episodes of any TV show ever and I highly recommend it. It’s about Bender getting lost in space, inadvertently becoming a “God” for a civilation of creatures that grows on him and then meeting the almighty himself. It’s brilliant. 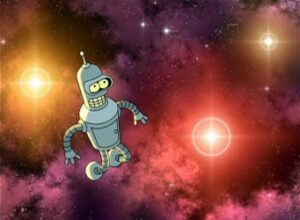 Yes, the world is filled with tragedy, and unspeakable sadness, as we see and are reminded on a daily basis. While there are evil people and atrocities that make me question everything, there is still beauty and love all around us. I don’t know what any of this means. I have no answers. Only fleeting evidence that maybe there is something more. Life finds a way.