Let’s be honest, New York City is amazing two seasons of out the year (Spring and Fall) and pretty much sucks the rest of the time. Summer is way too hot. Winter is too cold and too long (with the exception of Christmas which is magical in New York). A NYC subway on a day that 90 degrees or more is Dante’s first circle of hell. You long for the subway to show up, hoping it’s properly air conditioned, also hoping that a homeless person isn’t living on it and making it smell like a person decaying, it’s even too hot for the rats, as they splash in poop colored water on the tracks. You almost want to wear a mask just to avoid the smell of all the people who refuse to wear deodorant, but you feel like you’ll suffocate with one of those things on.

Yep. That’s summer in the city. It’s gross. It’s why I spend about half my time at my various “summer homes” on Long Island. Of course, I don’t own a summer home. I don’t even own a home. Luckily for me, I’ve a big family and good friends that I stay with, various guest rooms and couches, with pools and a short trip to the beach. Not to mention the company, as I sometimes do get lonely in my humble studio apartment.

My sister’s house I probably frequent the most (although she doesn’t live close to the beach). When her husband travels for work, I try to make a point to be there a couple nights. Her kids, my nephew (7) and niece (4), welcome me like a celebrity. When I come through the door, my name is cheered and I’m tackled with hugs.

If they only knew how much I miss them.

Not that I belittle their emotions. When my nephew was smaller he used to cry when you left. It was heart wrenching. My niece tells me she loves me somewhere between 20-30 times a day, and I’m not exaggerating.

I recall my own childhood. Every summer, my Uncle Kenny and his family would drive up from Virginia to Long Island to stay at our house. We had quite the house for summer. We had a small boat, a big yard with an out-ground pool, a sizable deck equipped with a big table and a grill. Our family lived for summers. And we gladly accepted company that loved being in the water with us.

Despite the distance between us, Uncle Kenny and I were always very close. This is possibly because even though my mom is one of six kids, he is her closest sibling. And, oddly enough, his daughter and I are remarkably similar (even though we grew up in different states and aren’t the same age).

I greatly looked forward to their visits. We’d go to the beach, play in the pool, eat a lot of watermelon, stay up late, have fires, and lots and lots of laughs, as it was Kenny who was the official unofficial comedian of the family. Long before I was comic.

They usually stayed four or five days and then would drive back. I would beg my Uncle Kenny to stay longer, even though they would stay in my room and I had to camp on my parents bedroom floor when they visited… “please stay! You don’t even have beach near you in Virginia! You can stay the whole summer! Or how about a month? Stay a month!”

When they left, I remember feeling like I was going to cry sometimes. I don’t think I did. I think I held it in, but I probably went somewhere later to be alone and quietly cry without anyone noticing. When they got in the car and started driving away, my siblings and I would chase the car as long as we could keep up, waving, just being able to see them a little longer.

Present day, at my sisters house, the kids sometimes bicker about who gets to sleep next to Aunt Lori. Usually, all three of us end up sleeping in the couch. I could move upstairs to one of the kids room but another memory comes to mind.

Back when I was small, when my sister and I shared a bedroom, my mom used to tuck us in goodnight. When my mom went to give me a kiss, I would wrap my arms around her as hard as I could, “sleep in my bed tonight,” I would demand as I squeezed in hopes she wouldn’t escape. Just stay a little longer.

Eventually, of course, you grow out of this. And good thing too, it would be pretty weird if a teenager was behaving this way and a red flag. But knowing that these small, short and precious years of being a kid, when they want you around all the time (and your attention which is exhausting), when they just want you as close as possible to make them feel safe and loved are so fleeting, it makes the decision easy when it comes to staying an extra night or not. I guess I could stay a little bit longer… 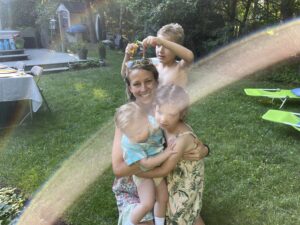