While being a late blooming runt caused strife throughout my youth, there was no time I hated it more than going to an amusement park and being denied entry to big rides. You might as well have cut out my heart. Of course, on some level I understood it was not because I would be afraid (I wasn’t) but rather that it was extremely dangerous for a person as small as me to be in the seat of a giant coaster.

Still, before a parks trip, my parents would get me shoes that gave me a solid two inches of height (see pic below, those sketchers made me taller) and would coach me and my kid brother to go on our toes, not completely as that would be to obvious, but just a little. Once, Mitch and I were allowed to go on a ride, only to be turned away for that same ride later in the day. Mitch cried. I choked back my tears, not wanting to look any younger than I already looked. 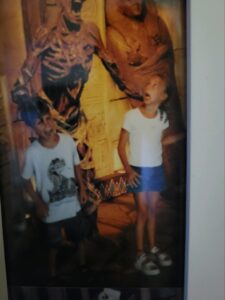 On lines for rides on my recent family trip to Orlando, I watched some kids get turned from rides and I couldn’t empathize with them more. My dad told me, sometimes when they tried to get us on rides, the person would look at him like, “are you serious, dude?”

I feared my niece, Charlotte (almost 5 now), an already adrenaline junky, would be upset not being able to go on certain rides. But after scaring the wits out of her on The Tower of Terror, when we told her a ride was too scary for her, she’d listen.

When you’re small, the world seems to constantly remind you. I think I was in eighth grade when my feet finally touched the ground from sitting in desk chair at school. According to weight guidelines, I was supposed to be in a booster seat in a car throughout middle school. I drew a line there. There was no way I was going to sit in a booster seat. I was accustomed to climbing countertops to reach anything in upper cabinets. People always pointed out how small I was, as if I wasn’t aware. Well into high school, I was forced to shop at Kids R Us, and the kids section at nearly every store we went to. I started wearing a bra in high school though I really wouldn’t need one until I was almost 20. My boobs went from A cups to C cups when I was 23 (a much welcomed surprise!) almost overnight, it was weird but awesome.

Oddly enough, I’m one of the tallest Palminteri’s. The Italians, we’re mostly a short people. And even though my mom is only a couple inches over five feet, the height (and extreme late blooming) comes from her side, as she has brothers over six feet.

The Rockin’ Roller Coaster, the fast launching roller coaster set to Aerosmith music in Disney’s Hollywood studios, was the first “big” roller coaster I was ever on. I was immediately hooked. That kind of rush lead to years of begging to be taken to any amusement park that had big roller coasters. Though, my parents denied us parks like Six Flags until Mitch and I were taller.

Adventure Land, a permanent fair on Long Island best known for being complete trash, was beloved by us as kids. We loved the biggest coaster there. I remember, once, my mom took us kids there one day and we just ran onto that roller coaster over and over. Well, back then, all they had on that ride were these hard plastic seats. The next day, we complained that our backs were killing us. When my mom lifted up our shirts, she gasped. Our spines were all bruised up, looking like someone had beaten us senseless. We were advised not to show anyone these bruises as it may look like child abuse (haha).

I’ve only been to Coney Island twice in my life. The first time I went, I suppose I was in college. Some of my friends and I went, undoubtedly getting high on the beach before wandering the New York landmark. I had both read the book and loved the movie “Requiem for a Dream,” which meant Coney Island made me feel kind of weird. We went on the Cyclone, which is hailed as one of the earliest roller coasters. To this day, that is the most violent roller coasters I’ve ever been on. I’d never ride it again, as my neck already has permanent injury. I nicknamed the Cyclone, “the seven dollar abortion,” and I standby that joke as not only funny but accurate.

Of course, my lust for rushes never did stop at coasters. Surfing, jumping off cliffs, anything that went fast, stand up, drugs, questionable relationships, love (a most potent drug), and the determination, if not desperation, for a career in something that didn’t just make me money, but gave me creative satisfaction and fulfillment. I’d say I’m about half way there, despite the odds. Despite all the times I felt I was falling too short. Denied time after time, it hurting every time much like being turned away from a ride as a kid. On top of this, I’d like a romance that doesn’t need to be Disney Prince, but the type of match that makes you feel young. Is it such a tall order? Perhaps. But it seems I’ve never been the type of person who won’t wait for the best.