The first talent show I ever participated in I was in elementary school. My sister and I would do a tandem performance. The song/act we would perform was hand picked by our mother, and as I recall, I had little say in the matter: we were to sing “I Got You Babe” by Sonny and Cher. Lisa would be Cher and I was Sonny.

The logic behind this was simple: Lisa could sing and I was cursed with this nasally voice and might even be relatively tone deaf, especially in my right ear which has permanent hearing damage from repeated chronic ear infections as a child. Also, Lisa, being older, is taller. And Cher was taller than Sonny. In my mom’s defense, it was a hilarious idea. Though I wasn’t too keen on cross dressing. Especially as a guy who died skiing. He died skiing, really? Couldn’t I cross dress as a cool rock and roll star who died from drugs or AIDS like Freddy Mercury? 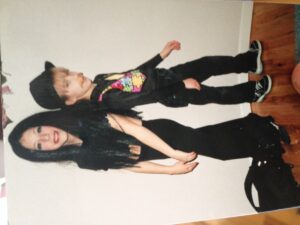 [Let this picture be suffice evidence that my head grew at an alarmingly fast rate while my body would continue to grow into my twenties— alas I’ve grown into my head and am now proportional.]

I don’t know where my mom got this puzzle piece vest that I wore like some sort of autistic kid. I don’t think I fully grasped just how funny this sketch would be, but I did do it because I thought it would be funny and even back then I wanted to make people laugh.

The other kids in the talent show didn’t really know who Sonny and Cher were (I mean, of course, we were kids of the 90s) but the adults all thought it was pretty clever. I still remember taking the stage and hearing the crowd go “awww” and as Lisa and I sang our duet, it was a  smash hit. Kid’s talent shows are generally pure torture if you’ve been to one, but our Sonny and Cher was refreshingly unique, if not just straight up bizarre.

Fast forward to many years later. When I’d be a professional performer.

There’s a particular talent show on network TV that features all types of talent that is judged by celebrities. It’s a well known American Talent (hint, hint) show that I will neglect to tell you the name. Like American Idol, the “auditions” for this show features long lines where people try to get their moment of fame. However, these lines are a fake promise. Because the real talent has appointments for auditions and very few people who wait hours/days on the line for the camera actually make the show.

I had been doing comedy about 5 years when I got a call from a producer of the show to audition. Of course I was stoked. This could be a big break for me. Still, I knew the show wasn’t particularly kind towards comedians. Half the judges didn’t understand comedy. Often times they make awkward cuts for the show, making it look like the comic bombed or leaving out key parts of bits so the jokes didn’t make sense. Still, this was a risk I was wiling to take.

My audition was set in NYC. I needed practice.

The weekend before my audition, I had a gig in a theater in Ohio. It was a fantastic gig. 750 people. I killed. However, Ohio was getting hit by a massive snow storm. And even before I took the stage, my flight home the following day (Sunday) was canceled. My audition was the following Monday. All flights were going to be grounded.

A pit formed in my stomach. I was going to miss my audition for a national TV show. A TV show where millions would see me. What could be a big break.

One of the other comics on my gig had not flown, he drove. He lived in NJ and was planning on driving back at first light. He offered to take me as far as NJ. This was very kind of him. I was able to arrange a pick up in NJ back to Queens. I would make my audition, thanks to the help of fellow comics.

Alas, I made my audition. I was quite nervous, as I’m used to performing for audiences, not four producers and a camera. (You don’t go directly to the celebrity judges, there’s a screening process where you audition in front of producers first.) The audition was only 5 minutes, as that’s all the time you’d have in front of judges, but they liked my set so much, they asked me to do more time. My nerves were shaken off and I had a great audition.

Shortly thereafter, I was contacted again. They wanted me to make a tape for them, requesting certain bits I did. Governor’s Comedy Clubs were my then home clubs and I was able to make auditions tapes there pretty easily. The Talent show also coordinated an on phone interview— where I would talk to a producer about my life and dreams for an hour.

The show, however, is big on sob stories. They love a sob story. They tried to pry one out of me. I neglected to disclose much of my mental illness as I didn’t really want to talk about my depression too much. But I did talk about my anxiety and overcoming an introverted nature. Overall, I had a good life. A loving family, a support system in the comedy community— I wasn’t exactly a sob story.

The show green lit me, and they scheduled a flight to LA for me to perform for the celebrity judges for the show. Again, I was excited and nervous. Until my own sob story befell on me.

My grandma died. My grandma, after a long struggle with Alzheimer’s passed away, the sweetest woman I’d ever known. Her funeral was the day of my audition in LA.

I contacted the producers and told them of my loss, requesting a different audition date. I didn’t want to miss my grandma’s funeral. They then told me they were canceling my audition all together, and weren’t going to fly me out for the audition. Just like that I was axed from the show.

To be honest, I don’t think it was because I had to cancel my audition because of my grandma’s death. I think they lost interest in me because I didn’t have this grand backstory they were looking for. Still, I was crushed.

In retrospect, I think it was a blessing. Like I said, the show isn’t particularly kind to comedians. Likely, it wouldn’t have done anything for my career. There was a better chance that they’d humiliate me than put me on a pedestal.

That, however, doesn’t change the fact that I will forever hate that show.

Show-business is like that though. It’s as fickle as it is unfair. And you just have to keep plugging away. Now, as live performance doesn’t even really exist, I reflect upon the majority of my experience as a comic fondly, and have little regrets as far as my career choices go. The biggest regret I have is that I get so stressed I forget to enjoy it. How I miss it so, now. And how much I look forward to enjoying it again one day, even with a side of anxiety.