Like most mornings, I woke up tired but unlike more recent mornings felt motivated.  Since it was going to be a shit snow Saturday, I decided I would drive to my best friend Jimmy’s house to be snowed and watch some movies, do some writing, and then run errands, more writing and gigs on Sunday.

Ah… sounds lovely.  An ideal weekend.  Until my drive out to Long Island proved ominous.  First, I witnessed the after math of this car wreck and thought… oof… maybe I should just be home. 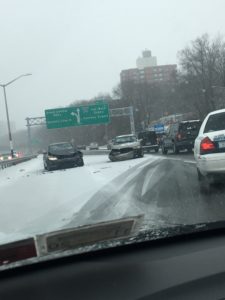 The ride out was slow, and a dizziness came upon me.  I chalked it up to being tired, as I so often am, and also hungry since it was after 2pm and I hadn’t eaten since the morning.  So I figured I’d pick up some food and I did, which Jimmy and I ate upon arrival.  Only I threw it up about 10 minutes later.

I texted my friend Katrina who came over for dinner, where I made chowder to see if she was okay.  She said she felt healthy.  That’s good.  I warned her that I threw up and wasn’t sure if I had a bug or maybe food poisoning from something else.

We put on “Once Upon A Time In Hollywood,” a film I couldn’t properly review since my dizziness would grow to blurred vision and my stomach was not only starting to cramp, but burn.  I squirmed on the chair, knowing I was going to either throw up or have diarrhea or both… soon.  I tried rubbing my stomach for comfort.  What the fuck.  I had been congested and tired all week but I didn’t feel especially sick at all until this moment.

In tunnel vision, I ran (a very short distance) to the bathroom for a liquid poo.  I then became so dizzy, I collapsed on the bathroom floor, my pants still around my ankles, reaching up to the handle of the toilet to flush it.  At that point, I was happy I didn’t shit myself.

I felt horribly embarrassed I showed up to my best friends home in this condition, now possibly putting him at risk of infection, but I also wasn’t sure I was going to be able to stand without fainting as my vision blurred into doubles and triples, my head sweat and my stomach felt like it had razors and acid in it.  This felt worse than when I had food poisoning in Costa Rica last year.

Crawling out of the bathroom, I grabbed a pillow from the couch and curled and the floor in the fetal position.

“Jesus, Lori.  Are you okay?”
Holding back tears, wishing I could cry out for my mom, and clutching my stomach, “I don’t know, my stomach hurts so bad.  I feel so dizzy.”

It was clear to me I was burning up a high fever, and while I didn’t want to vomit again, I both knew that was coming, and wanted to get it over with because I assumed that would mean I’d feel better.

Jimmy offered remedies, but I was half delirious.  I asked him to fetch my bag, where I have a small first aid kit (yeah, I’m a soccer mom like that) because I had some alka-seltzer tablets I hoped would at minimum stop the stomach pain.  It was extremely difficult to drink.  Shaking and trying to keep myself from sobbing on the floor, Jimmy asked if we should go to the hospital.  The thought had crossed my mind too, since I was in so much pain, but A. They probably couldn’t do anything until my body purged my insides, B. Getting up, going down the stairs (he lives in an upstairs apartment) and into a car seemed legitimately impossible, C. I didn’t want to vomit and shit in a car.

“Well, let’s at least move you onto the couch.”

I requested a sheet (as a blanket would be too hot) and a garbage pail, unsure if I would make it to the bathroom to puke.  My prediction would prove accurate.  Some (what felt like forever) 15 minutes or so later, I projectile vomited into said trash can.  I couldn’t get up for a few after, I was beyond dizzy.

Throwing up, at least, offered temporary relief of the stomach pains, and the worst of the stomach burning was now behind me, but not wooziness that made me both feel like I was going to lose consciousness, and yet, kept me from sleeping.

The next hour or so, I was burning up a fever and wholly out of it.  I was catching glimpses of the movie but I might as well have been tripping on drugs, I only understood what I was watching in intervals of trying to distract myself from my stomach pain.

When the wooziness subsided and I was able to stand, I still felt horrid, but so much better than before.  It was that type of pain that makes even a goddless heathen such as myself go, “please, God, make this stop… I’ll eat better, drink less, go to bed earlier, be kinder.”  I asked Jimmy if he could pick up some white rice and gatorade.  Despite the weather being awful, he went out to get these goods.

Because I was so dehydrated, I likely drank the gatorade too fast.  The little rice I ate gave way to the returning stomach cramps.  This time, I’d make it to the bathroom for some simultaneous shitting and vomiting. Fun times!  However, I was more lucid this time and didn’t need to retreat to the floor in fear of passing out.  My face was covered in sweat and I looked some sort of ghostly pale deceased version of myself.  I had only just begun getting back to a healthy weight and now I really looked like l felt… like shit.

Through the night, I’d be in and out of fever dreams.  Complete confusion as to where I was, when it was, where I was supposed to be, hallucinating texts and emails I was convinced came in, unsure if I had responsibilities I wasn’t completing, angry at myself for not being more of a writer, when that’s what I pride myself as, knowing I’d have to cancel my gig the following night, upset I didn’t have more gigs to make up for it…

Because of the fever, I couldn’t really sleep for long increments, that and being wholly dehydrated.  This time around, I would only take little sips when I woke, despite wanted to douse myself, knowing that I’d just projectile vomit if I had more than a little at a time.  Struggling to find a comfortable position for my sore stomach, I repositioned, over and over, sweating completely through my over-sized NY Rangers shirt.

By the time the sun came up, my stomach was no longer in knots.  All my joints were achy.  My kidneys hurt, which alarmed me.  As did my ears.  I still felt out of it and weak.  But it did appear to be a 24 hour bug that violently raced through me.  Jimmy isolated himself from me for the day and I’d spend the day in and out of sleep, feeling weak and cold.

“You look really pale,” Jimmy said, “which I know is not what you want to hear.”

Maybe it was a necessary detox.  I canceled my gig and decided to stay another night on Jimmy’s couch.  It’s an hour drive back to my home in Queens and I was concerned I’d get really dizzy driving since I have no food in my system and still seem to have a coming and going fever.  I worry I might get him sick, but if I were alone in my apartment, I would have been worse off.  So maybe some things do happen for a reason.

In my on and off sleep, in between and haunting dreams about the past, present and future, temporarily convoluting my reality, I also had dreams about food.  So I’m getting hungry.  That’s good. Getting healthy.