Saying “I love art” feels like kind of a stupid exclamation. Because doesn’t everyone? Are there any people out there stoutly against art? Look, there is a great amount of complete garbage art that people consider great, but writimg about how I frequent art museums and read literature makes me a snob, which, when it comes to art, I’m not all that ashamed of.

Lisa, my older sister, and Mitch, my younger brother are both naturally talented artists when it comes to drawing or painting. This, they get from my mom, who is also gifted and extremely creative. I can get by on imitating some cartoons and such but Lisa and Mitch were clearly better than me from the start. Lisa honed her skills more. Took art classes and usually is creating/making some sort of cute things she could make money selling on Etsy (currently she is making custom wooden “Welcome” signs with all sorts of themes from summer to fall, Harry Potter to Mandalorian, Disney to Wizard of Oz).

Mitch never took it so seriously, but his raw talent is something to envy. He was a favorite in art classes he did take and at my parents house they have a framed picture he painted of a silhouette at the beach that people are stunned Mitch painted, unbeknownst of his hidden talent. Mitch custom painted designs on some of our surf boards growing up, and sometimes I’d find a note pad where he’d doodle when he was stoned (mostly of beach/surf/pirate stuff) and would grow furious that he was capable of doing this was he was inebriated and didn’t explore this talent further. Mitch is a wild spirit, like myself, and he’s capable of many things but for years I have pushed him to make designs for his own surf t-shirt company because I think something creative would suit him better than something corporate.

Of course, I had the gift of writing. Which was somewhat of a natural gift but also something I’d work on tirelessly. I remember being told I was a good writer since the second grade. My papers/stories were often presented in classes throughout all my school years and college. I won contests and was praised and pushed to write. So it’s no secret why I’m here, writing this blog, working as a writer for radio, editing scripts and searching for those perfect jokes. Neither Lisa nor Mitch can write much beyond a grocery list. And neither them (tragically) like to read.

It’s only natural for artists to be envious of the skill they are not good at. Even as a comedian I’m most jealous of comics who are good at characters or are great riffers— because I cannot do characters and riffing is weakness of mine. I’m pretty sure most comedians wish they were famous musicians.

In college, I was excited to take an animation class. By this time, I was a junior in college and playing to my strengths. I no longer took classes with tests, we were graded on essays, scripts and produced content. I strived for and achieved A’s all around. When you’re young and being adulated for your talent and efforts, it’s easy to assume you’ve found what you are meant to do— if such a ridiculous notion of fatalism exists. But the animation class proved more than difficult for me. I struggled. I was so excited for it because it was a pain in the ass getting my friends to act (for free) in my sketches and short films. With animation, I could write and produce bits without having to plan production shoots. My lack of being able to draw was one big obstacle. Then there was also my lack of patience. Mitch drew characters for me free hand for my final project that I animated. I ended up getting an ‘A’ in that class but honestly not because I was good at it. I just showed up to class early and stayed late because I found it so difficult… I got reward for effort over the final product.

One of the benefits of living in the city is the access to museums, galleries, exhibits and all sorts of immersive performances. Some years ago there was an M.C. Escher exhibit in Brooklyn. A couple friends and myself dosed on psychedelics and went. It was awesome. Escher (a genius, within a genius, within a genius) was not only a tremendous artist but a mathematician. His paradoxical works have created a genre of themselves and are some of the most impressive drawings you can stare at for too long. 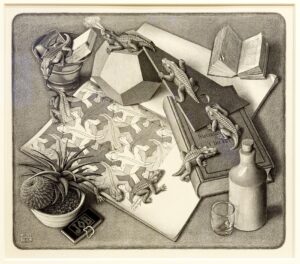 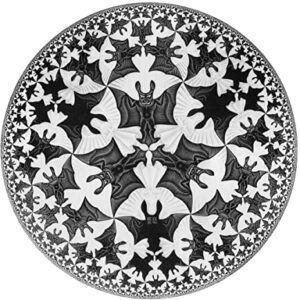 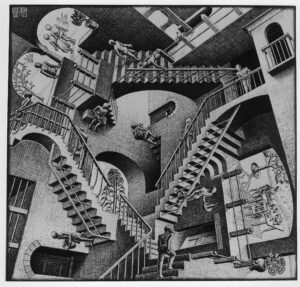 It’s not a great mystery why I’m drawn to artists like Escher, Dali or Gonsalves. I can’t create the masterpieces they have but sometimes I feel like they’ve tapped into something that my brain is tapped into: some sort of oddity that is as dark as it is wonderful and as perplexing as it is fascinating. Beauty in madness itself.

I like to think of comedians as master deceivers. In the sense that often the best jokes are misdirection. That’s how we illicit uncontrollable laughter from you. You think we’re going one way, and then we hit you from the side, take you for surprise.

Last year, I was looking for a good 2021 calendar (I’m really into having a cool calendar). I was browsing Amazon when I ordered “Masters of Deception,” which I thought was a calendar featuring artists such as Escher. When it showed up, it was a three hundred page text book. I was both disappointed that I hadn’t actually gotten a calendar and now had this oversized coffee table book, when, I don’t even own a coffee table but I also howled with laughter at the mere fact that I mixed up a calendar and a text book with the name “Masters of Deceptions.” How ironic.

Anyway, I still have the text book and it’s quite brilliant so I’m glad I mistakenly bought it. My mom ended getting me a moon calendar, as I’m a huge lunar lover. The moon itself, of course, is some sort of divine, cosmic master of deception itself.