3am. Tuesday morning.  I’ve been home for three hours, asleep for two.  My phone rings, and actually, it happens to be a night it’s both on and not on silent.  Often, I turn my phone off at night.

I have questions.  He has no broken bones, except for his teeth.  No stitches.  He doesn’t remember what happened or where he was.

“Excuse me, what hospital am I in?”

“Okay,” I tell him, it’ll take me a little over an hour to get there, but I’m coming.

I start putting on some clothes and my phone rings again.

That’s when I started to cry.

I got this exact phone call four more times on the drive out, until my cousin, Brian, thankfully pulled the phone from his hand.  Brian is a nurse, and lives closer to the hospital.

“He has a bad concussion.  He’s a goldfish right now, he just keeps asking the same questions.  His teeth don’t look that bad.  Other than that, he’ll be fine.”

This news brought much relief to what was becoming the longest drive of my life.

When I got there, Mitch said, “how did you find me?  Did the cops call you?  How are my teeth?”  Besides a couple of small chips, his teeth didn’t look bad.  I half expected them to be missing.

“I had a backpack.  Where’s my backpack.”

“Brian was here?  I don’t remember.  I must have a concussion.  Do mom and dad know?”

I started going through his phone.  He had called my dad numerous times, but it was still not even 5am.  He also called Brian, me, our friend Dean, and his ex-girlfriend.

I talked to the nurse to get more details.  Apparently, he was struck stopped at a red light.  The nurse, who was very pretty, also told me that when he was admitted, face bloody and talking in circles, he told her he was a famous model and needed his good looks.

“Did the cops call you?”

“I don’t remember.  I must have a concussion.  Fuck.  I gotta stop getting brain damage.”

He didn’t remember where he was, so I did some digging on his phone.  I also forbade him to call anyone else to prevent freaking them the fuck out with the same goddamn phone call.

“Are you telling me that I might’ve gotten laid last night and don’t remember it? Why am I naked?  What happened to my clothes?  Who undressed me?  Where was I when I was hit?  How fast was he going?  So they found me lifeless in the street?”

For some reason, we both laughed at that last part.

“So, wait, let me get this straight.  Some guy plowed me from behind at a red light?”

“I’m gonna sue the balls off that cocksucker.  Call my lawyer.  Should we call him now?”

“Brian was here?  How do my teeth look?”

“Is my bike totaled?”

“Probably.  If it isn’t, I will personally build a small bomb and blow it to tiny bits.”

“So… you’re telling me, I was just waiting at a light and I got plowed from behind?”

“Did I go through the windshield?”

“I’m gonna sue the balls off this motherfucker.  Call my lawyer.  How do my teeth look?”

“Brian was here?  Damn. I must have a concussion.  Is my bike totaled?”

This conversation, almost verbatim, happened on a loop from about 5am to 8am. The guy behind the curtain on the other side of the room was moaning in pain, and every time Mitch started with, “so you’re telling me…”  the guy would go, “oh no, not again!”

It’s not funny when someone is in pain, except when it is just plain funny.  My brother was getting heckled by a guy who was sick of his story and didn’t even realize it.  At some point, I just wrote down the answers to his repetitive questions and put it on his bed to try to read my book. 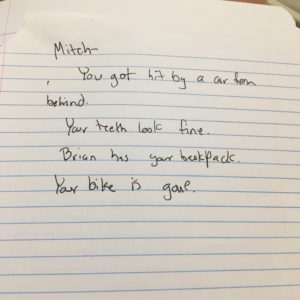 It didn’t help much.  He still asked the same questions, and I would point to the paper.  Occasionally, this made him laugh, realizing that because the answers to the questions he was going to ask were already there, he was concussed and had asked these questions before.

“My bike is gone?!”  He would say and then laugh, his spirits were surprisingly upbeat.  “Fuck, my back hurts.  My ass hurts too.”

“Yeah, that’s not from the accident though.  That’s from the gay sex you had right before that you don’t remember.”

This got a big response from him.  Since he would forget that joke in five minutes, I figured I could use it a couple more times before it became hack to me.

“I fuckin’ told you not to buy that bike.  I fuckin’ told you.”  Lecturing him was rather pointless since he would forget.  Also, I was being bitchy to him, but he would also forget that.  “I don’t want to be right about these things.  I want to be proven wrong sometimes.  You’re not allowed to die yet.  I need you.”  While both of us have made it pretty clear that we don’t want to grow old and we want to die quick, not yet.  It’s too soon.  Not yet.

After some pain killers, he fell asleep which at first worried me. “Aren’t people who are concussed not supposed to sleep?”  Nurses reassured that they’re monitoring him and he can sleep.  This was a relief to me because I was going crazy reliving the same conversation.

As the day went on, he started retaining some of the information that was being repeated to him.  As for me, I had to go back to Queens and work the next day.

When I got home, I was exhausted and nauseous.  I hadn’t eaten much all day, and stress often manifests itself in stomach cramps for me.  But I was happy.  Because I was going to bed. And my brother is alive.  Lucky motherfucker.  Spending his 9 lives before he’s 30.  When our mutual friend Dean came to visit, he put it best, “Mitch, there’s no special place in Hell for you, because otherwise you’d already be there.“