Can I Smell Your Baby?

New born babies have some magical powers. They legitimately release pheromones from the top of their head to make you love them. This sneaky trick you and I did as well when we were mere days old, unaware of what we were, yet alone what we were doing. The pheromones create strong bonds especially between mothers and babies, but the smell of a newborn can trigger any human (though more likely women) to want to protect or even take care of this little human. They need this defense since they are helpless to keep themselves alive for years to come.

This is why newborn babies smell so good. Don’t believe me? Clearly you haven’t been smelling baby’s heads as long as I have. Okay, okay… that DOES sound really creepy. What sounds even creepier is there have been times I’ve been on a subway and saw a mother or father with a baby swaddled to them and thought, “man, I’d love to smell that baby.”

Love can be a lot of things, I suppose. And it most definitely can be a result of chemical reactions in the brain. The family I used to nanny for had four kids. All of them I held tight as infants and whiffed their soft heads. Then, of course, any of my cousins and especially my sister’s kids got the same wafting treatment while in my arms. When both my nephew Anthony and niece Charlotte were infants I seldom missed an opportunity to cradle them and kiss their heads, scooping them out of their cribs and rockers so I could be close to them.

At one of my cousin’s weddings, Charlotte was about a year old. She was the sweetest little thing. Charlotte was (is) attached to my sister, but given the fact that my sister and I look so much alike, I was one of the few people she allowed to hold her for a while before searching for her mom. 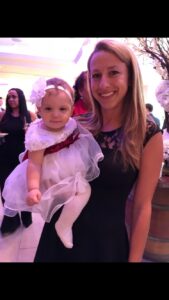 My cousins and I were drinking heavily at the table at reception, as you do, and we joked about how good it was to get a whiff of a baby’s head and how it makes you feel great. So in-between songs, we’d run from the dance floor to the table where Charlotte was with my sister, “lemme get a whiff of the baby,” huff Charlotte’s head like a hillbilly sniffing glue and let out a “whoooo! That’s a good smelling baby!” And then we’d return to the dance floor “high” on infant hormones. This is how my family behaves at weddings.

Last year, I got a late night call from my brother. It’s not unlike Mitch to text or call me at odd hours, usually about something utterly ridiculous. But for anyone who knows me, they know I’m not usually a phone talker and Mitch is even worse than I am in that regard.

But this wasn’t so ridiculous.

Tears of excitement and joy streamed down my face. “You’re going to be such a good dad. Your baby is going to be the coolest and cutest kid!”

Of course bringing in another life comes with its share of nerves, but I was rejoiced to being thrice times an Aunt. Mitch will have a son. Blaise. Named after his mother’s late great grandfather. Blaise Johnny. Future gold medal Olympian surfer… if he takes after his dad. Blaise will be shredding and surpass me as a surfer before he’s 10, I’m sure.

It’s not that far off in the future I’ll get to meet Blaise and smell his head. But he doesn’t need to use his magical newborn pheromones to make me love him. I already love him so much. I wouldn’t say I’m a baby crazed woman… but I am an Anthony, Charlotte and Blaise crazed woman. And I’m so happy Anthony and Charlotte will have another cousin— for my childhood was made so much better by my own many (19) cousins. As long I’m living, their happiness will be a priority to me. Even more than my own.

I can see him already. Cradled in my arm, asleep on my breast, his tiny perfect body safe and sound with Aunt Lori.