For the record, I don’t love playing ‘Barn.’ In fact, I don’t even like it. The only enjoyable part of playing ‘Barn’ for me is that my niece likes it so much. Charlotte, who is now three, is prone to her temper tantrums. And like many little ones these days, she has an unhealthy attachment to her iPad that makes me uneasy. But when Charlotte is in the throes of fake tears over the pettiest shit ever— what immediately stops her crying? Asking her to play ‘Barn.’

Last Christmas, Santa got the kids a toy barn filled with little plastic animals. When Charlotte and I play ‘Barn,’ she is the baby pig and I’m the mommy pig. The baby pig locks mommy pig out of the barn until mommy pig can coerce baby pig to go swimming and then sometimes baby pig climbs on top of barn and makes mommy pig nervous but when baby pig falls, mommy pig then cures baby pig with kisses. If it sounds like the most uninteresting game ever, it’s because it is. I actually like playing ‘violent’ games with my nephew and his action figures but my niece, in a typical girl fashion, is really into family role playing.

Charlotte is the baby of the house, but she’s already in charge. I went to go for a run in a sports bra and she goes, “Aunt Wori, where is the rest of your shirt?”

“What are you my dad??! It’s 85 degrees out, this is how I run. Plus it produces less laundry if I don’t wear a shirt— you know what, you’re three and I don’t have to answer to you.”

Her brother, Anthony, just turned seven years old. My sweet boy. For his birthday, my sister got him one of those giant blow up slides with water that he and his friends played on for hours. The next morning he comes down the stairs, “my back hurts.”

“Yeah, because you were flying down that slide for four hours.”

“Now I know what it’s like to feel old.”

He’s not wrong. Everyone in my family is with injury now. My neck. Lisa’s knees. My brother-in-law’s shoulder. Mimi and Pappy’s back.

My brother, now with his own cosmic family, actually does have a little farm. With chickens and everything! Mitch loves those chickens to a degree I simply cannot understand. In fact, he often sends me pictures of them, which irritates me because his son is just about the cutest baby ever and at no point in the day am I pining to see a chicken and I almost always want to kiss little Blaise’s cheeks. 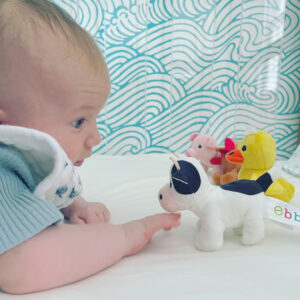 I had a picture of Blaise on the screen saver of my phone because his face melts my heart. But then I was going out one night and being on the market and all, I decided to change it because I didn’t want any one thinking I was a mom. It’s hard enough to find a date in New York.

Anthony will soon grow out of wanting to marry me. This of course is a good thing. If he continued to want to marry his aunt long after seven we’d have some Game of Thrones problems, but it is he who crowned himself my ‘prince charming.’ At the end of day of Anthony’s birthday party, both Charlotte and Anthony curled up next to me and fell asleep, worn out from the day. I felt like Alan at end of ‘Jurassic Park.’ My little snugglers. The sweetest. 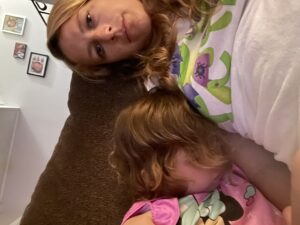 “Do we live in a barn,” was an annoying cliche phrase my parents used if ever a door or window was left open. “Do we live in a barn?” No. We did not live in a barn. We lived in a modest sized house on the south shore of Long Island and we weren’t allowed animals in the house. My sisters’ home can be chaotic when my parents are staying there and I am too. If humans are mere animals, then it is somewhat of a barn. And Charlotte will insist on telling you everyone’s family role. But it’s no Orwellian Animal Farm here. Far too many cuddles, snacks and games of UNO. No, no… this Barn is filled with far too much love. And we are warm here, where the youngest rules, here in Charlotte’s web.