You may or may not recall some weeks ago I published a blog called, “I May Need Your Help.”  This was a literal cry for help, but not in a desperate, dire nor even cry for attention.  In fact, (as strange as this may seem) I try to water down some of my more depressive posts because I don’t want people to worry or pity me.  In general, I have a support system and a defense mechanisms (more on this later) in place to help me weather whatever I’m going through.

Because I know what I’m up against.  And I know I can handle it (and will) but I’m so tired of being alone.

And so, some people, loved ones and near strangers, have heeded the call and made efforts to reach out.  This is much appreciated.  I assume also, that those who pulled a branch from their own busy lives, have reason to reach out beyond just mere concern for me.  I assume that they also have some sort of dark cloud either above or near them, or perhaps long in their past, but I both think and hope there is gain and comfort for them too, not merely a task or chore for them to care.

A best friend leaves me a voicemail every morning.  One person I’ve never met, who happens to be a good friend and big fan of my good friend, comedy hero and writing partner, Nick Griffin, writes me daily via email.  Nick’s endorsement is more than enough.  As a nerd and a writer, I very much enjoy pen pals (more on this later).

To this day, my mother and I send each other hand written letters (sometimes I type mine, as my handwriting is atrocious).  We both love writing letters as much as we love receiving them.  I read once that David Sedaris (my favorite author) said about his long time partner (Hugh, which any Sedaris fan knows well) won’t accept emails while he’s on the road for book tours.  That he wants hand written letters from David because he feels they are more thoughtful (I’m paraphrasing here).  This is not to say I expect people to start sending letters via pigeons (haha).  My mother isn’t the only one who sends me hand written letters.  Her childhood best friend, Carol, also sends me letters.  Carol, who’s had a life of hardships, is easily one of the most pure-hearted people I’ve ever known.  And she adores my mother, and my entire family.  My parents and I joke about how we are not nearly as great as she thinks we are, that while we are actually a caring people, we are rather mean spirited (haha).

In Carol’s letters, not only does she shine in support of whatever I’m doing, she glowing writes of childhood memories with my mom.  It’s so clear my mom had such a profound impact on her life, for good.  Her memories of time spent with my mom are so strongly filled with fun and adoration.

So often, these letters from both mom and Carol make me cry.  Not because they are sad… just the opposite.  They are happy.  They are filled with love.  One of my mom’s favorite songs is a song my The Flaming Lips (that’s right, my mom is hip as hell and has great taste in music), “Do You Realize??” There’s a lyric in there that says, “do you realize that happiness makes you cry.”  It most certainly does.  Although her favorite lyric of the song, which makes her think of her three kids and two darling grand-kids is, “do you realize that you have the most beautiful face.”

“Do you realize that everyone you know
Someday will die?

And instead of saying all of your goodbyes, let them know

Okay… back to the daily emails from Nick’s friend.  He had suggested some weeks ago that I give a go at one of these “Happy Lamps,” an idea he got from a co-worker who has one placed on her desk.  These Happy Lamps are supposed to simulate sunshine and help stave off Seasonal Affective Disorder (so accurately shortened to SAD).

I will say this about Seasonal Depressive Disorder… it’s not some made up bull shit.  A dear friend of mine who is from California moved to New York some years ago.  She was dating and is now engaged to one of my childhood best friends.  In those first couple of New York winters, she admitted to feeling genuinely crazy and so blue, she didn’t understand what was wrong with her.  My buddy diagnosed SAD, understanding that this shit can really fuck you up.  He was spot on.  As the days lightened up, she started to feel better.

“Light Therapy,” according to the Internet works like this:

“Sitting in bright light – at least 10,000 lux – for 15-30 minutes daily during the winter months helps stimulate cells in the retinas that connect to the hypothalamus. The hypothalamus is the part of the brain that controls circadian rhythm, the body’s 24 hour internal clock that regulates the natural sleep/wake cycle. If circadian rhythm is disrupted, it can cause an increase in daytime sleepiness, a tendency to oversleep, and an overall sluggishness during the day. Stimulating the hypothalamus at the same time every day can help restore natural circadian rhythms and decrease the symptoms of SAD.

Of course, I’m a born and bred New Yorker, so cynicism is in my DNA.  But, alas, I’m an adventurer, so I’m always down to try new things.  Especially things that have literally no downside whatsoever (although I’ve also been known to throw myself into things that can have serious downsides and consequences as well).

Only a few days later, I was visiting my cousin Brian and his girlfriend Christine.  As I’ve written about in many blogs, I have many cousins, some of which are my best friends.  Once again, being the dubious person I am, and holding my cousin’s in the highest esteem, I harshly judge whoever they date.  Because they are the best humans and I believe they deserve to also be with the best humans.  A little over a year ago, I joined them as a third wheel on a camping trip to observe the Perseids meteor shower (I am frequently a third wheel with cousins and their partners, although it doesn’t feel awkward).  After that weekend, it was abundantly clear why and how he was in love with her (also, clear why she was in love with him, but that part I already knew).

Christine, a radiant optimist, kept telling me she had a birthday present for me that she kept forgetting to give me (my birthday is in May).  When I was over there some weekends ago, I opened the belated gift, and much to my fatalistic surprise, it was one of these Happy Lamps.  This, of course, made me laugh.  I have to email my pen pal!  Christine is very sweet and thoughtful that way.

Now, I have this Happy Lamp on a radiator (that doesn’t work) next to my bed, near a windowsill that holds some of the books I’ve read.  In the mornings, I try to remember to put it on before I get out of bed (I lamented that the light does not give one a tan).  Once, I got up early before work and went for runs.  Now, I get up with just enough time to get ready for work to not be tardy.  Even that feels like an accomplishment some days.

So… we put the Happy Lamp to the test.  When asked if I’m getting results, I reply with, “I think the Lamp is in over it’s head.”  I was reading the directions one day and I belly laughed because it said, “if you still feel sad, spend more time with the Lamp.”  This has become a running joke with some of my closer friends, who create scenarios where I’m out in public cradling this Lamp, unable to leave it’s light or I’ll crumble.  These are quite funny images to us all.

For what it’s worth, I think it does help me become more awake in the morning.  Though, I think if someone shone a giant flashlight in my face in the morning, it might have the same effect.  One day, I was actually mad at the Lamp, because it tricked me into thinking it was sunny outside.  It wasn’t.

Now, having started therapy again (haha, I’m going to be in and out of the therapy my whole life I figure, while I definitely have commitment issues (we have discussed this) it’s usually financial issues that prompt my discontinuation of therapy), I was talking to fellow comedian and unofficial life coach, Brian McFadden, and I said (in talks about how November being a tough month for me) that I was suiting up with armor to protect myself.  “Wait,” he said, “isn’t the point of therapy to tear down that armor?”  I laughed and laughed.  He wasn’t wrong, however.  Little Miss Tough Lori, defending and protecting the sensitive side, has become such a force, that she is actually doing the many facets of myself a disservice (she doesn’t appreciate that sentence).

Whether or not the Happy Lamp itself is doing anything, I can’t say for sure.  But it is a reminder of the pen pal’s faith in me, the concern of Christine, the jokes my friends say to make me laugh.  It’s a source of light, even with the light off.

Thank you for reading. 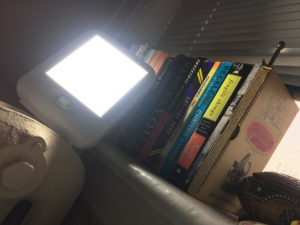