Years ago, when I was just a fledgling comedian, I did a set for an online forum, “Comedy Time TV.” At the time, of course, I had no credits and was only like three years into comedy and was rather green. I got paid a stupid small amount of money for it and signed away the rights to the clip– meaning, they do not own my material, but they can do what they want with the clip. I guess I was excited initially, but only a couple years later I would regret doing it, because I was becoming a better comic and I didn’t want my novice set out on the internet. But oh well. There was really nothing I could do about it. I couldn’t have the clip removed from their Youtube channel.

Anyway, just the other day, I was trying to find an old article I wrote, so I googled my name along with a few key words. You know how when you google something, video results pop up in a box up top? Of course, it’s not odd for videos of myself to come up. I have stand up clips out there. But I noticed something strange. The clip from comedy time TV was up there, under a channel called “Chick Comedy” with the title of my clip labeled “I Use A Butt Plug vs Pulling It Out.” The clip has over 165,000 views.

What the actual fuck. 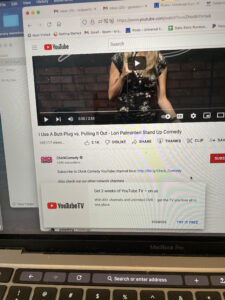 The title is complete click bait. I don’t (nor have I ever) have jokes about butt plugs. In fact, I’ve never even said the phrase, “butt plug,” into a microphone. And I understand that objectively the term “butt plug” is funny. “Butt” and “plug” are funny words individually. But such lewd humor really isn’t my style.

Also, it doesn’t really make sense. If you’re using a butt plug, you don’t have to pull out. It would make more sense if it was “using a condom vs pulling out.” Or, “I use a butt plug vs poppers.” Still, I don’t talk about any of this stuff in that clip. I have a joke about having a flat butt and pulling the plug on my great aunt.

Here are two truths: First, they are making money off this clip because there are ads. Second, I don’t think I can legally make them take it down or sue them. I can, however, report them and perhaps get the title changed to something that doesn’t exploit me sexually. This is false advertising, a slander of my image, and maybe even sexual harassment.

The comments, however, were pretty funny. Some people even wrote, “she doesn’t talk about butt plugs.” Most people said I was funny but needed to work on my delivery. Which I agree with! I did work on my delivery and I’m a much better comic now!

Perhaps, what bothers me most is the fact that advertising “butt plugs” leads to more clicks. It’s not that I don’t know that sex sells. It’s just disheartening that I’ve spent my entire career trying to be clever with misdirection and write smart jokes, but perhaps I would actually be more successful if I were Lori ‘Butt Plug’ Palminteri.

Time for a rebrand?

I kid, I kid. This is a cautionary tale, though, for young artists (especially women). Don’t be too hasty to sign away your rights to something when you are still new. You will most likely regret it later. You’re going to want to be able to control your material as much as possible, which is getting increasingly difficult, especially with so many people on tik tok just mouthing over comic’s bits.